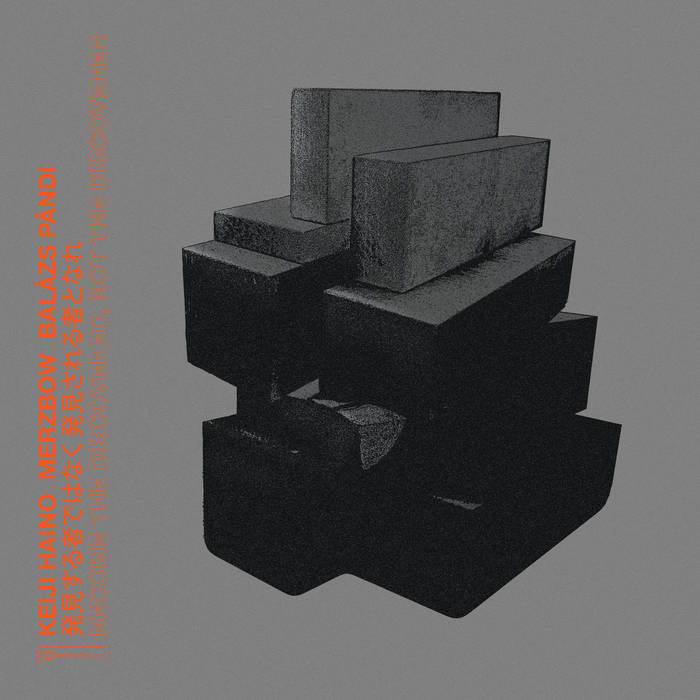 swahl This is beautiful, cathartic noise.

A certain magic floods the room when free improvisers of the highest order get together to make music. And when said improvisers are also kindred spirits who know and can anticipate each other’s moves, a kind of wonderful telepathy takes over. Such was the case when enigmatic Japanese noise legend Merzbow (Masami Akita) got together in the studio with fellow countryman Keiji Haino and Hungarian drummer Balazs Pandi for Become The Discovered, Not The Discoverer. For their second encounter for RareNoise Records, following 2016’s An Untroublesome Defencelessness, the three intrepid improvisers explore a threshold of sound so blisteringly intense, that it passes into a zone of divine cacophony.

Comprised of four lengthy, uninterrupted suites, each containing dense, sometimes harsh sonic onslaughts, Become The Discovered, Not The Discoverer is fueled by Merzbow’s cathartic sheets of electronic sound and guitar, Haino’s slashing guitar, bass and vocal work and Pandi’s pummeling intensity on the kit. And as Pandi explained, “It was 100% improvised, nothing added in post-production, just like every time we record together. No limitations, no concepts, nothing. Just listening, and playing.”

Merzbow has found a true kindred spirit in Pandi, who has also become a kind of ‘house drummer’ for RareNoise. “The chemistry between us was there right from the very beginning,” said Pandi, who began collaborating with Merzbow in 2009. “My way of playing fits his music perfectly, as I play both improvised music that is changing shape all the time and heavy amplified music. We don’t have things anchored, we just have a continuously expanding vocabulary and we pay attention to each other and find immediate hooks in each other’s playing.”

The third member of this formidable triumvirate, singer-songwriter-guitarist Keiji Haino, had previously worked with Merzbow under the moniker Kikuri. “Keiji is like an infinite well of ideas, said Pandi. “It’s incredible how he can push music and sounds into new directions. Sounds coming from him have way more qualities than the ones coming from most musicians, as he uses every possible way to alternate sounds and give them extra qualities that people just don’t know about.”

For Pandi, this latest is also the fifth recently RareNoise release involving both him and Merzbow, following 2013’s Cuts (a trio with Swedish saxophonist Mats Gustasfsson), 2015’s Cuts of Guilt, Cuts Deeper (a quartet with Gustafson and skronk guitar hero and Sonic Youth founder Thurston Moore), 2018’s live Cuts Up, Cuts Out (a quartet again with Gustafsson, and Moore) and 2016’s An Untroublesome Defencelessness (as aforementioned, with Haino). And for the powerhouse drummer, the thrill is definitely not gone. “It’s been almost 10 years since I first played together with Masami as a duo,” he said. “That was a string of four shows, and even on that tour there was a difference between the first and the last gig. So its obvious that we continue to do different things, and our relationship on a human and an artistic level also strengthened throughout the years. For obvious reasons we can’t play too many shows. In a busy year, we have about a handful of shows, but it’s always exciting to play and we always discover new things within our music. Masami never uses the same setup twice, and I always do my best to have something new to drop on him every time we play together.”

As far as the particularly intense nature of this latest invocation in the studio with Merzbow and Haino, the drummer said, “All we do is listen and play. Wherever we go with the music, the moment takes us there. Even if we make a plan, we just go with whatever we feel like doing. Haino-san decided on the spot to use the bass guitar, an instrument he never played on previously on recordings, if ever. Also Masami plugged in a guitar he found in the studio, so for a part of this recording we were a rock trio. The only thing we talked about the night before was to do five to seven-minute takes, but then the first take we actually did was over one hour.”

While Masami and Haino strike such a seamless blend with their electronic onslaughts, Pandi fuels the proceedings with his signature skills, drawing on the power of grindcore and death metal while also listening intently and reacting in the moment. “I just play whatever feels good to play,” he said. “It’s funny that even though I try to not play in tempo anymore and approach drumming more as coloring to give the music another texture, this one turned out more like a classic rock record. And at some parts I am even playing a backbeat kind of thing. So it’s definitely more straight-forward drumming than what I usually play these days.”

“I basically grew up with playing and being surrounded by all kinds of music.”, continues Pandi, “Back then it was Morricone scores, Verdi, Bill Haley & The Comets. One day I would play Dead Kennedy songs with my high school punk band, the next morning I would play “Slavonic Dance No. 8” by Dvorak on tympani. And still today, I have varied music tastes. So whether I’m playing with Merzbow, Obake or Kilimanjaro Darkjazz Ensemble, it’s all music to me.”

Like the music itself, the titles of Pandi’s latest outing with Merzbow and Haino — “Become the discovered, not the discoverer” and “I want to learn how to feel everything in each single breath" — are intriguing. “The titles came from Haino-san and are inspired by the music,” the drummer explained. “The titles, just like the music doesn’t need to be understood, or doesn’t need a strict interpretation.”

Born in Chiba, Japan on May 3, 1952, Keiji Haino has been active on Japan’s underground music scene since the 1970s and remains active at age 67, ever-exploring on the fringes. His main instruments of choice have been guitar and vocals. Known for intensely cathartic sound explorations, he has lent his distinctive voice to recordings by a variety of groups, including Vajra (with underground folk singer Kan Mikami and drummer Toshiaki Ishizuka), Knead (with the avant-prog outfit Ruins) and Sanhedolin (with Yoshida Tatsuya of Ruins and Mitsuru Nasuno of Korekyojinn, Altered States and Ground Zero). He has also collaborated with such artists as Derek Bailey, Peter Brötzmann, Loren Mazzacane Connors, Charles Gayle, Makigami Koichi, Jim O'Rourke, Yamantaka Eye, Fred Frith, Charles Hayward and John Butcher. He also appeared on John Zorn’s 1993 album Painkiller with bassist Bill Laswell and drummer Mick Harris.

Haino’s initial artistic outlet was theatre, inspired by the radical writings of Antonin Artaud. He had his musical epiphany after hearing The Doors' “When The Music's Over” and immediately changed course towards music. After brief stints in a number of blues and experimental outfits, he formed the improvised rock band Lost Aaraaf in 1970. By the mid 1970s, he collaborated with psychedelic multi-instrumentalist Magical Power Mako and in 1978 formed the rock duo Fushitsusha. The lineup expanded to a trio and continued to perform, with shifting personnel, through the 1990s. In 1998, Haino formed Aihiyo, which performed covers of tunes by The Rolling Stones, The Ronettes and the Jimi Hendrix Experience, filtered through his own unique garage-psychedelia prism. In recent years, Haino has made some of his most profoundly intense musical statements in the company of fellow countryman Merzbow and Hungarian drummer Pandi.

Merzbow's onslaughts of sound employ the use of distortion, feedback and noises from synthesizers, machinery, and home-made noisemakers. Utilizing two laptops, four stomp boxes and a homemade sound-maker, he creates a world of sound ranging from ambient drones to fusillades of frightening intensity. One of the most recognizable figures on the international noise scene, he began his recording career in 1980 with Fuckexercise and Rembrandt Assemblage. He followed in 1982 with his landmark recording, Solonoise, which incorporated tape loops and creatively recorded percussion and metal. He has since released over 400 recordings, collaborating with dozens of musicians, contributing tracks to compilations and making numerous guest appearances on recordings by other artists. His stage name Merzbow comes from the German dada artist Kurt Schwitters' artwork Merzbau, in which Schwitters transformed the interior of his house using found objects.

Born in Tokyo on December 19, 1956, Akita listened to psychedelic music, progressive rock and free jazz in his youth. He became the drummer of various high school bands and shortly after began playing improvised rock at studio jam sessions with high school friend Kiyoshi Mizutani. A graduate of Tamagawa University, where he majored in Painting & Art Theory, Akita commenced work as an editor of several magazines upon getting his degree. He subsequently became a freelance writer for several books and magazines and has written several books of his own on a variety of subjects, including music, modern art and underground culture. His other interests include painting, photography, filmmaking and Butoh dance. He has cited a wide range of influences on his own music, from progressive rock, heavy metal, free jazz, and early electronic music to non-musical influences like dadaism, surrealism and fetish culture. His 2010 project, 13 Japanese Birds, was a 15-album series highlighting his ongoing ecological and vegetarian activism.

The youngest member of this powerhouse improvising trio is drummer Pándi Balázs. Born on August 6, 1983 in Budapest, Hungary, he has worked and toured with various acts from all around the world including Venetian Snares, Otto von Schirach, Last Step, To Live and Shave in L.A., The Blood of Heroes, The Kilimanjaro Darkjazz Ensemble and the Italian experimental instrumental group Zu. His current projects include Italian doom band Obake, Metallic Taste of Blood (featuring Colin Edwin of Porcupine Tree, Eraldo Bernocchi of Obake and RareNoise Records’ resident keyboardist, Jamie Saft), Slobber Pup (with Saft, guitarist Joe Morris and bassist Trevor Dunn) and the black metal/punk band Wormskull. From 2012, he started to play solo shows at festivals under his own name. Since 2009, he has frequently played drums live with Merzbow, headlining at experimental music festivals around the world. Pandi’s muscular drumming style, marked by high-speed churning, intense blast-beats and thunderous double bass drum pedals, has been informed by free jazz, breakcore, doom metal and noise. It’s always pedal to the metal with Pandi.

Together these three intrepid explorers and noise renegades arrive at some intense, harsh and ultimately compelling on Become The Discovered, Not The Discoverer, their latest RareNoise release.

Artwork and Design by ROK

Bandcamp Daily  your guide to the world of Bandcamp